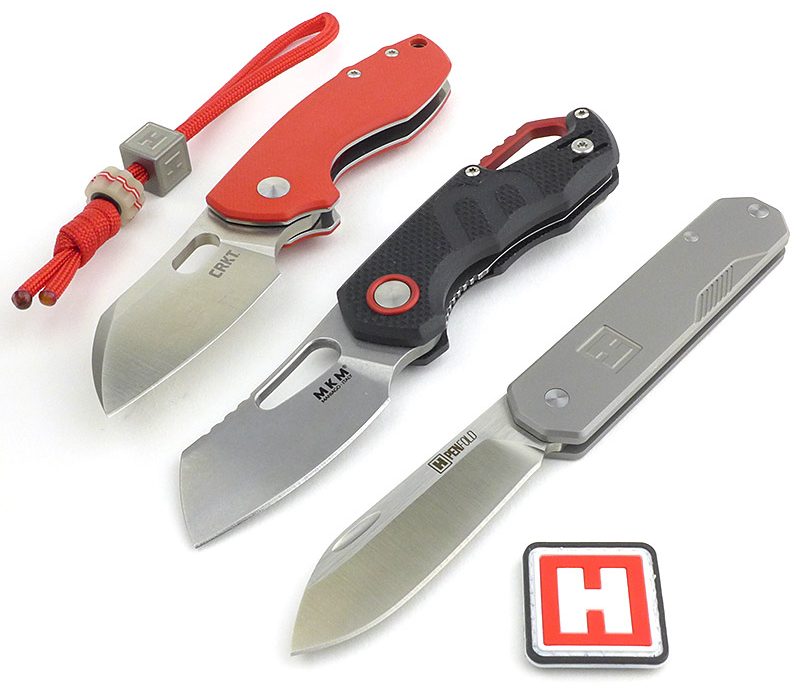 In the UK, Heinnie Haynes is an institution and essential in the search for knives as well as outdoor and EDC gear. Having been a specialist in knives for so long, not satisfied with just selling standard production knives, Heinnie Haynes have been commissioning customised and enhanced special editions, many of which are slip-joint conversions of lock knives (to allow UK EDC). In this review we are taking a look at three of these Heinnie special editions – a slip-joint conversion of the CRKT Pilar and MKM Isonzo, plus a the sleek Heinnie designed Penfold. 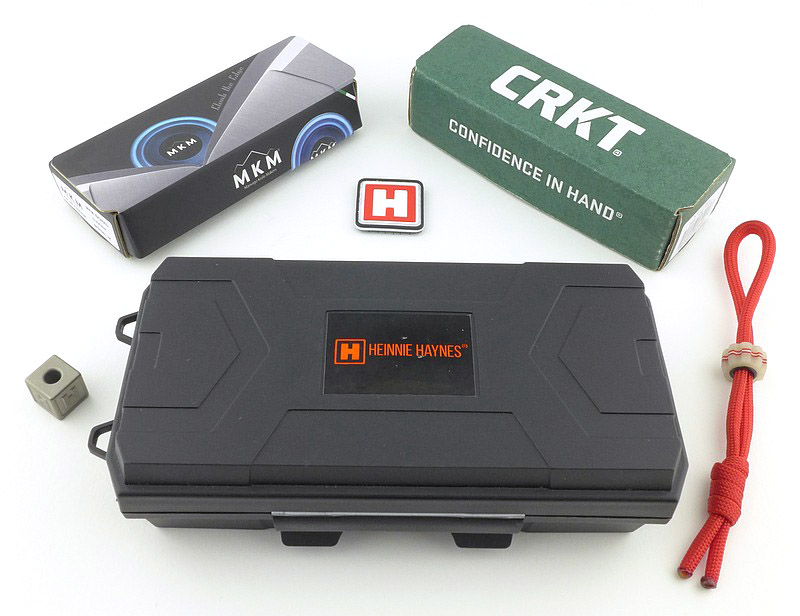 This video has a quick look at the Heinnie Penfold and MKM Isonzo, and then a much more detailed examination of the CRKT Pilar.

A good look round the Heinnie CRKT Pilar – Things to look out for here are:
The exclusive special edition features include the G10 scales and spacer in Heinnie red, plus the conversion to slip-joint using a double spring-and-detent concealed within the handle.

A good look round the Heinnie MKM Isonzo (Cleaver blade)- Things to look out for here are:
Originally using a liner lock, the remains of this lock are clearly visible, but with the addition of a detent on the sprung bar (previously the lock bar). Highlights of Heinnie red let you know this is the special edition.

A good look round the Heinnie Penfold – Things to look out for here are:
Entirely a Heinnie design, the Penfold takes the classic pocket-spring slip-joint knife, and streamlines it with a beautiful simplicity and clean look.

The Blade and Handle – Detailed Measurements:
For full details of the tests and measurements carried out and an explanation of the results, see the page – Knife Technical Testing – How It’s Done. 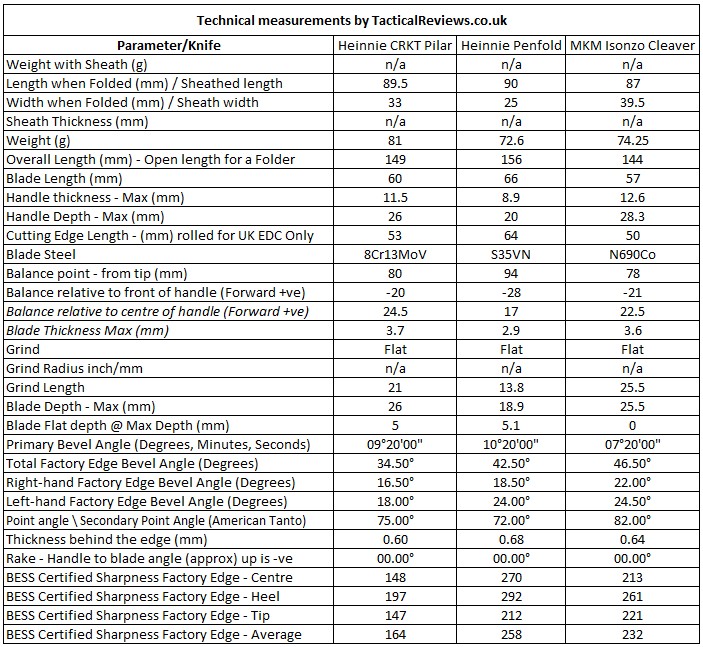 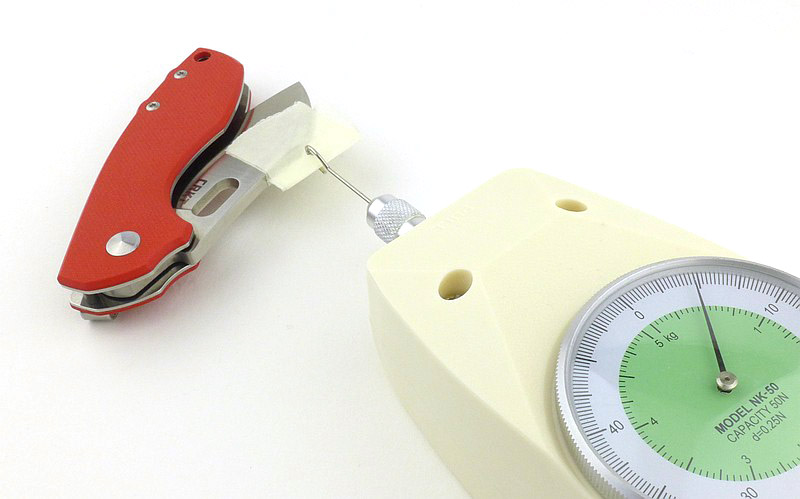 As a little ‘cherry on top’ I’ve added a couple of Heinnie beads onto paracord lanyards.

Check out this how-to video for the lanyards I like to tie. See Tutorial Page Here.

Inspired by the rasp-like grip texture of the MKM Isonzo handles (plus noticing other ‘pocket ripping knives’ over the years), a new test was born – the pocket-shredder test. Taking some raw calico and fitting and removing the knife’s pocket clip onto the calico fabric as if it were a pocket edge. This was done only 5 times; here you can see the comparison of how aggressive the pocket clip grip is. The MKM is a shredder!

Heinnie Edition CRKT Pilar – It’s a compact knife, three-finger-grip size, so, frustrating for it to be a lock knife where carry restrictions prevent EDCing a locker. Heinnie Haynes special slip-joint edition makes this a lovely, and EDCable, working knife. It is a slight disappointment that it only has a tip-down pocket clip. I initially thought this might be a deal breaker and this does conflict slightly with the lanyard hole, as to use the pocket clips means stuffing the lanyard into your pocket, opposite to how it should be. However, thanks to its small size and ease of handling it actually hasn’t been a real issue.
The sheepsfoot blade shape is very practical, presenting the tip and edge nicely for draw cuts.
One-handed-opening is easy and the slip-joint detent is firm enough (assuming correct cutting technique). Thanks to the vision of Heinnie Haynes, we have a super usable, easy to carry, and inexpensive EDC pocket knife.

Heinnie Edition MKM Isonzo Cleaver – This knife drew me in as soon as I saw it, Jesper Voxnæs’ distinctive design, which was also originally a liner-lock knife. With Heinnie Haynes stepping in and arranging for a slip-joint conversion to open up this excellent knife’s EDC-ability.
In this version, it has the ‘cleaver’ blade (although effectively this is really a slightly deeper sheepsfoot shape), with the characteristic downward presentation of the tip, making it a very practical cutter.
The peeled G10 scales have a texture that almost reminds me of the rasp side of a box grater (the one you end up skinning your finger joints on). This texture is super grippy, and I feel I could keep hold of this despite oil or anything else slippery on my hands.
For its overall size, the Isonzo is quite wide when folded; wide enough I could not fit it into any of the knife belt pouches I have. The secure grip from the rough handle texture is actually really good, and feels fine for general use, so I definitely want to carry this. Despite being my preferred tip-up clip position, its ferocious grip texture makes the pocket clip something I won’t use, as it will rip pockets to shreds; so, I just popped it into the bottom of whatever pocket or pouch/bag I had.
With a deep full flat grind, the blade had the narrowest primary bevel angle of the three in this review, and proved a great slicer with lots of control.

Heinnie Penfold – Those sleek lines make the Penfold beautiful in its simplicity. This is a knife imbued with elegance and sophistication, and a joy to behold every time you bring it out. When this arrived, I got out an old leather belt pouch I’ve had for probably over 25 years, and it’s been on my belt every day since then (with the Penfold in it of course).
Initially I was a little put off by the thickness of the blade. In terms of visual design, the thick blade looks super, but a thick blade loses out in slicing ability, so I didn’t have high hopes for the usability. Well, I could not have been more wrong; every task I’ve used it for has been completed with ease and not impeded by the blade thickness. There will be some cutting jobs the blade thickness may end up slowing down, but so far this has proven a cracking daily carry! 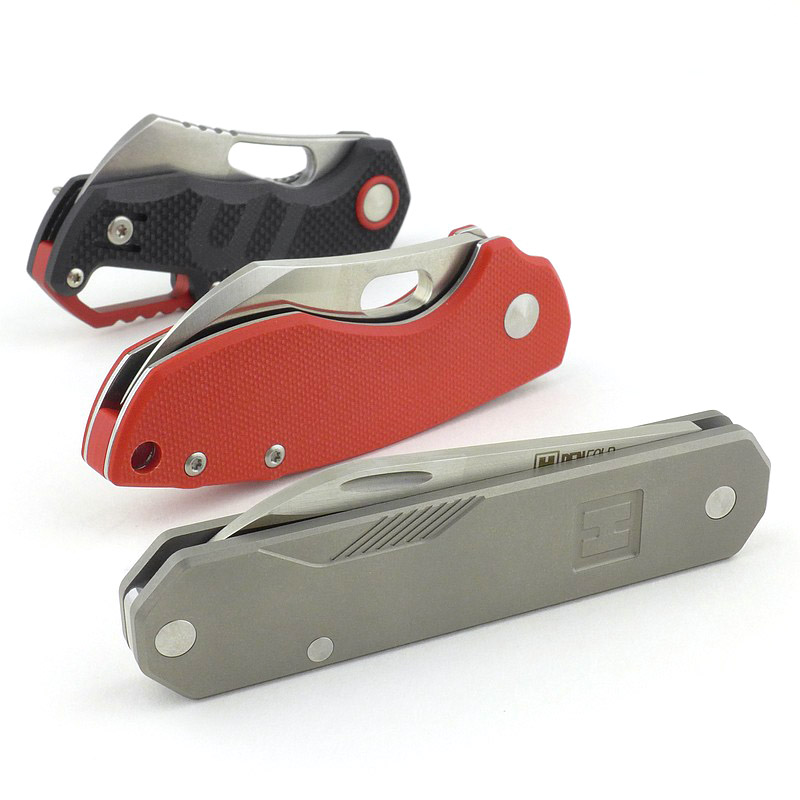